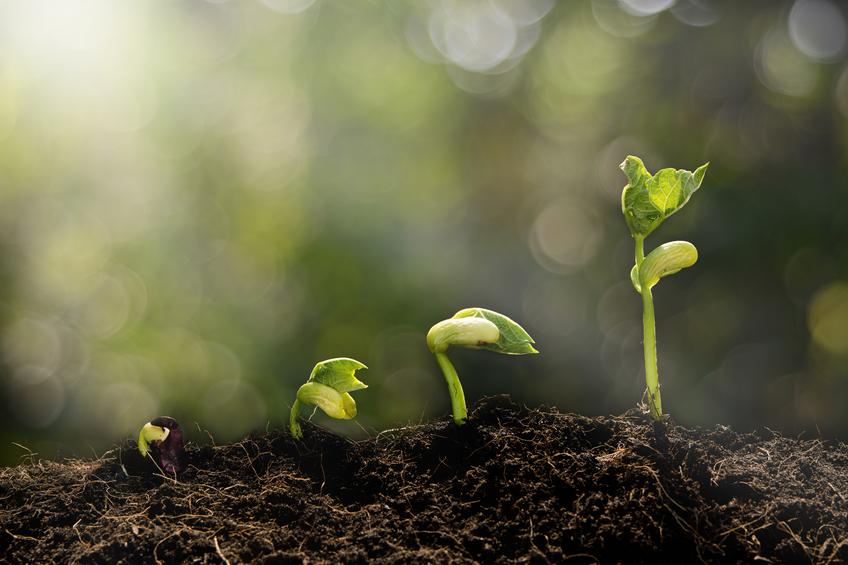 There is an awful lot of fungus in the world. There are an estimated 1.5 million species with a total biomass around twice that of all animals. Despite their widespread occurrence and diversity this group of organisms is poorly understood. Fungi are famous for their effects on moldy bread, itching toes and degrading the foundations of our homes. While some people do acknowledge the importance of fungi to make bread, beer and blue cheese, overall they are vastly under appreciated. Some soil fungi are incredibly important to sustainable agriculture for a very different reason. This article will shed some light on this particular “farmer’s fungus” that pays big dividends.

Hidden from view beneath the soil surface in the farmer’s field there is a relationship between fungi and plants that is fundamental to life on the planet. Fungi can’t make their own food. They have to absorb their nourishment from living or dead organic matter. Organisms like fungi help assure the earth’s resources recycle as they should. There is a particular group of fungi that does this by cooperating with important crop species. 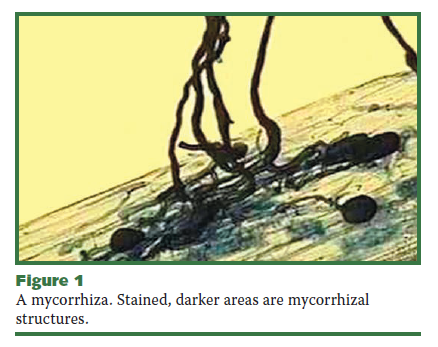 We have come to understand that in natural habitats plant roots are a complex mixture of both fungus and plant; a mycorrhiza which literally means ‘fungus-root’ (figure 1. A mycorrhiza). Nine out of every 10 species of plants form an association with these specialized mycorrhizal soil fungi in order to thrive (see back page). Cabbages, broccoli, nettles and annual weeds are among the few plants that manage without. The plant needs the fungus and the fungus needs the plant. The fungus is responsible for getting the nutrients and water from the soil, and in return, gets carbohydrates from the plant. It is what we call a “symbiotic” relationship, one in which both plant and fungus benefit. The fossil evidence indicates that the relationship dates back over 460 million years and was critical to plants early establishment on the harsh earth’s surface. 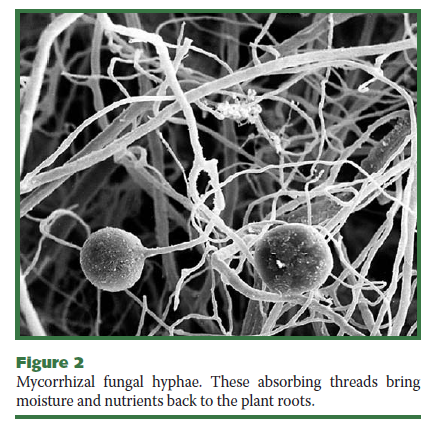 The body of the fungus consists of very thin strands called hyphae (figure 2. Fungal hyphae). In healthy soils these strands grow into the roots of the crop and out into the soil, greatly increasing the surface area of the root system. The most widespread type of mycorrhizal relationship are the arbuscular (am) mycorrhizae (formerly called “endo” mycorrhizae) and are formed by most of the plants used in agriculture. The fungus grows inside the roots of the host plant, and pushes hyphae out into the soil. These fungi form their spores or “seeds” as individuals or small packets near root systems just beneath the soil surface (figure 3. Arbuscular mycorrhizal spores). 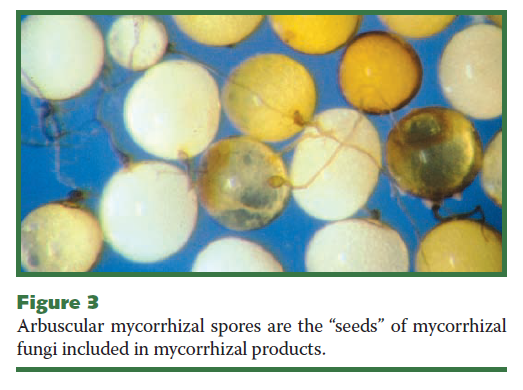 Arbucular mycorrhizae, occur on more plant species than all other types of mycorrhizae combined and have been observed in roots of more than 1,000 genera of plants representing some 200 families. It has been estimated that more than 85 to 90 percent of the more than 300,000 species of vascular plants in the world form arbuscular mycorrhizae. These include most grains, vegetables, fruit and nut trees, vines and turf grasses.

The effect of the mycorrhizal relationship on the root system is dramatic. Most of the absorbing area of the root system is actually fungal hyphae. Hyphae are much thinner than roots or root hairs and are able to grow in the tiniest pores in the soil. A thimbleful of healthy soil can contain miles of fungal hyphae! As a result, the efficiency of the plant’s nutrient and water uptake is increased enormously. 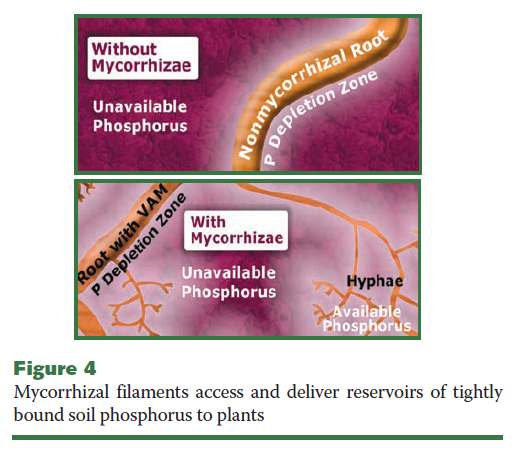 Often the farmer’s soil contains an abundance of nutrients but delivery to the crop itself is limited. Mycorrhizae are particularly important in mobilizing phosphorus and other tightly bound nutrients in the soil and transporting them back to the plant (figure 4. Illustration of mycorrhizal colonization indicates differences in p nutrition). Recent research has also demonstrated the critical role mycorrhizae play in nitrogen uptake and transport. In exchange, the mycorrhizal fungus get sugars produced from the leaves, the plant’s solar-powered energy factories. The plant is providing the energy for the fungus to do its job and to propagate its spores for the next generation of mycorrhizae.

The relationship between the soil, plant and fungus is dynamic. In order to extract nutrients for the host plant, the mycorrhizal fungi produce chemicals and enzymes which modify the soil structure and chemistry. The energy that plants pump down into the mycorrhizae is utilized by the fungal hyphae to maintain a healthy soil structure. For example, glomalin, an important organic “glue” excreted by mycorrhizal fungi welds soil particles together in stable aggregates. The resultant soil porosity is essential for the movement and storage of air and water beneath the soil surface.

Mycorrhizal benefits do not stop there. They help protect the roots from pathogens such as phytophthora, fusarium, phythium and rhizoctonia. Chemical warfare down in the soil has led mycorrhizal fungi to evolve powerful antibiotics to protect plant root systems. Research studies have documented that mycorrhizae protect the root systems by acting as a physical and chemical barrier to the invasion of pathogens.

Studies have shown root infections by pathogenic nematodes are generally less severe on crops colonized by arbuscular mycorrhizae. A number of mechanisms of interaction between mycorrhizae and nematode pathogens have been observed. For example, decreases in root exudation by arbuscular fungi change the attractiveness of roots to nematode pathogens. Arbuscular mycorrhizae also improve host plant vigor, and thus reduce yield losses caused by nematode attacks, especially in low P soils and if mycorrhizae are established early in the growth cycle, before nematode outbreak. Numerous observations also show direct control by hyphae of mycorrhizal fungi actively capturing and “strangling” live nematodes causing mortality (see video gallery at www.mycorrhizae.com). While the mechanisms are still being examined the evidence strongly indicates that mycorrhizae suppress parasitic nematode damage of roots or reduce nematode effects on plant growth and yield.

Agriculture’s need for fresh water is growing faster than nature can provide. It’s quickly becoming one of the key resource issues of the 21st century. How do natural areas provide for such luxuriant plant growth without irrigation? One important way is that mycorrhizal threads attached to the roots of colonized plants scour the soil resource absorbing water during periods of adequate soil moisture, retaining and slowly releasing water during periods of drought. Natural areas have achieved a level of drought tolerance that far exceeds agricultural areas in part because an enormous web of mycorrhizal threads act as a sponge protecting plant communities from extreme moisture deficits (figure 5. Oats showing differences in water efficiencies). 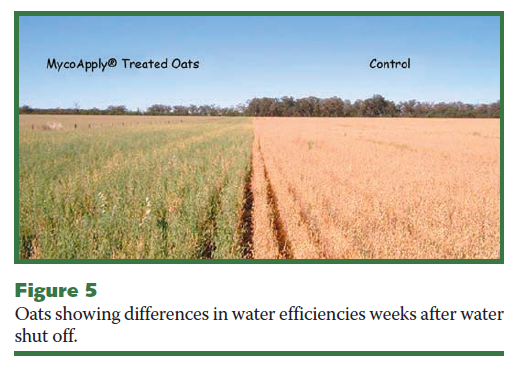 These mycorrhizal threads are much thinner than roots and can penetrate into the small soil pores and access pools of water that are unavailable to thicker roots. An extensive body of research has documented the importance of the mycorrhizal relationship for efficient water use and drought protection for a wide array of important crop species. The growing cost and declining quality of water are formidable issues facing farmers today. Using mycorrhizal fungi to improve water use efficiency and decrease water input costs is a tool available to today’s farmer

Does my farm have mycorrhizal fungi?

Once lost from a farm, arbuscular mycorrhizal populations are slow to recolonize, unless there is close access to natural areas that can act as a source of mycorrhizal spores to repopulate the affected area. Arbuscular mycorrhizal fungi do not disperse their spores in the wind, but must grow from root to root, or be dispersed by animals, so close proximity to healthy and undisturbed natural sites may be necessary to repopulate a disturbed soil. This is very slow to occur. Farmers seldom have the opportunity to grow their crops immediately adjacent to undisturbed natural ecosystems.

How do I use mycorrhizal inoculants on my farm?

A farmer can enhance crop root growth, nutrition and yield and ameliorate many problems that result from intensive agriculture practices by inoculating with mycorrhizal fungi. Plants grew and thrived on this planet for millions of years without many of the problems facing farmers today. Nature provides the template. A more sustainable approach to crop establishment and growth includes using mycorrhizal fungal as an inoculant before, during, or following planting.

The goal is to create physical contact between the mycorrhizal inoculant and the crop roots. Mycorrhizal inoculants come in liquid, powder and granular forms and can be sprinkled onto roots during transplanting, banded beneath seed, used as a seed coating or watered in via existing irrigation systems, (figure 6. Incorporating mycorrhizal powder on wheat seed in seed box). The type of application depends upon the conditions and needs of the farmer. Generally, mycorrhizal application is easy, inexpensive and requires no special equipment. Typically for many agricultural crops the price ranges from $9 to $19 per acre. For existing orchards or vineyards the plants are larger and more inoculum is sometimes needed. Liquid forms of mycorrhizal inoculants are increasing in use and can be injected into the soil surface or watered into porous soils. 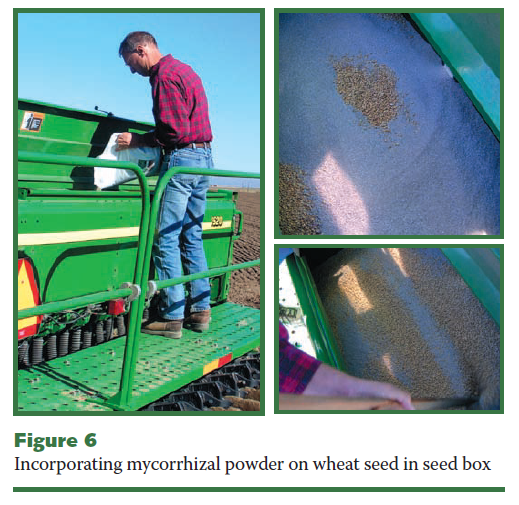 It is also now possible to have vegetables, fruit and nut crops which begin their life cycle in a nursery inoculated with mycorrhizal fungi (figure 7. Tomatoes with and without mycorrhizal fungi). Unfortunately, most plants raised in nurseries receive intensive fertilization, water, and pesticides without mycorrhizal inoculation. The artificial nursery conditions with high levels of water and nutrients and sterile soils produce vast quantities of plants for sale. The high levels of water and nutrients and the lack of mycorrhizae discourage the plant to produce the extensive root system it will need for successful transplantation, rapid establishment and optimum yields. The result is non mycorrhizal plants are poorly adapted to the eventual out planted condition on the farm where they need to begin to fend for themselves. Nursery grown plants already colonized with mycorrhizal fungi can more rapidly establish and take advantage of soil resources on the farm. 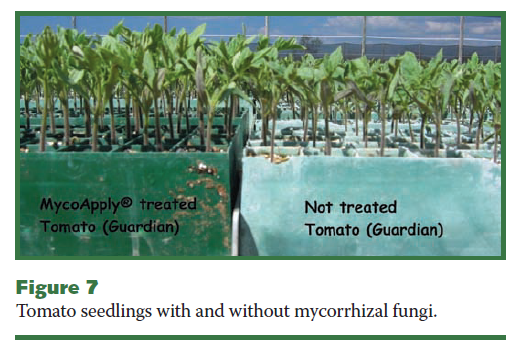 The economic return for mycorrhizal inoculation can exceed the cost several fold due not only to increased yields but decreased costs associated with fertilizer and water inputs. Recent advancements in mycorrhizal research and application have made farm use of mycorrhiza easy and cost effective. New products and knowledge have resulted in increased yields and lower input costs.

We live in exciting times. We now have serious tools to manage the land in more healthy ways and avoid practices that threaten our environment. We have done this by observing an area of the natural world that most have ignored and sharing it with farmers who can bring it to practical importance.

Learning about the role of mycorrhizal fungi, and the conditions that inhibit or promote their presence in the soil, is the first step toward healthier crops and increased yields. The next step is to add the fungi to the root zone when planting or transplanting and when restoring soil that was stripped of millions of years worth of nutrient and microorganism development. However, to be successful today’s farmer requires an appreciation of the “friendly fungus” that pays big dividends.

For practical information regarding mycorrhizae and their uses go to www.mycorrhizae.com or www.mycoapply.com.

Rascal to Remedy Fungus on the Farm

What does Activate NF do? –

Why Do We Need to Apply