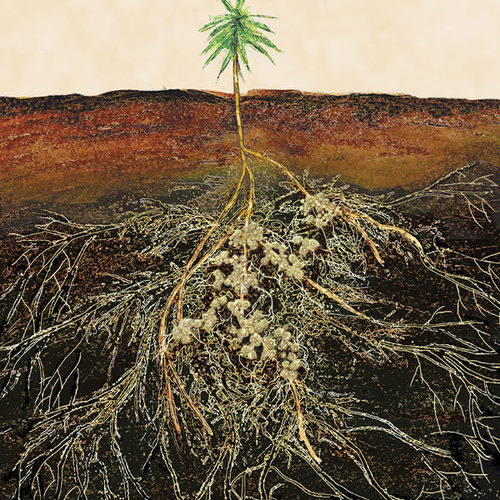 Mycorrhizae play an important role in plant nutrition. Because they are unseen, they are often disregarded when it comes to deciding upon a cause for decline in a particular planting. Just what are mycorrhizae and why are they so important in plant production?

The word “mycorrhiza” means fungal root. To be more specific, mycorrhizae are fungi that have a symbiotic relationship with the roots of many plants. The fungi which commonly form mycorrhizal relationships with plants are ubiquitous in the soil. Many mycorrhizal fungi are obligately symbiotic and therefore are unable to survive in nature for extended periods of time without their host. Because the relationship between the fungus and the plant is symbiotic, both members of the relationship obtain a benefit from each other. Neither the host plant nor the fungus suffer any ill effects as a result of the relationship. The fungus, because it does not photosynthesize, cannot fix its own carbon. Consequently, it receives all of its necessary carbohydrates from the host plant. In return, the mycorrhiza absorbs nutrients from the soil which are passed along to the plant.

In most situations, the roots of a plant occupy only 0.5% of the topsoil volume and even less of the subsoil. Because the hyphae of the mycorrhizal fungus is thinner than the plant’s roots, it is able to come into contact with more soil on a per-volume basis. The mycorrhizal fungi are made up of a root-like structure and posses a network of mycelium external to the tree roots that extends into the soil. This mycelium absorbs nutrients and translocates them back to the host plant. As a result, there is an increase in the absorption surface area of the roots.

There are some plant nutrients that move slowly in the soil and may appear to be unavailable to the plant. The result of this sluggish movement is a deficiency symptom in the plant. This is particularly important in the case of phosphorus. Most of the phosphorus in the soil is in an insoluble form. Insoluble phosphorus is unavailable to plant roots that do not have mycorrhizal associations. These same mycorrhizal roots also form associations with litterdecomposing organisms and thus are able to obtain nutrients from an otherwise unavailable source.

There are two main classes of mycorrhizae: ectomycorrhizae and endomycorrhizae. The ectomycorrhizae are also know as sheathing mycorhizae. They are found on many evergreen trees and shrubs. Deciduous trees are also colonized and include plants in the genera Fagus, Betula, Quercus, Tilia, Populus, Salix and Castanea. The fungus covers the ends of young roots and only penetrates the cell wall of the cortex; no further cellular penetration occurs. The ectomycorrhizal fungi belong to the class of fungi called Basidiomycetes. Basidiomycetes are fungi that commonly produce mushrooms as their fruiting structures. This explains the occurrence of mushrooms in the root zone beneath the dripline of a tree. Ectomycorrhizae not only absorb phosphate from the soil but they also are important in ammonium and zinc uptake as well. The fungi that form a symbiotic relationship with the plant are relatively host-specific. However, some fungal species may be more generalized and will colonize several species of plants. Ectomycorrhizal fungi are dispersed either by airborne spores or through the transfer of infected plant tissue.

Endomycorrhiza, on the other hand, invade the plant’s roots and develop entirely within the plant. Vesiculararbuscular endomycorrhiza (V-A type) are the type commonly found on deciduous trees as well as annual agronomic crops and other herbaceous plants. Unlike the ectomycorrhiza, the mycelium of the endomycorrhiza penetrates the root’s cortical cells. The hyphae grow inter and intracellularly within the root. In woody ornamentals, only the short roots are affected. V-A endomycorrhiza belong to the class of fungi called the Phycomycetes, or water molds. Other common fungi belonging to this class include Phytophthora, responsible for root and crown rot; and Pythium, which causes damping-off in seedlings. The fungus forms specialized absorptive organs called haustoria which are responsible for the uptake of zinc and phosphate. The spores of the fungus germinate in the rhizosphere – the area of soil directly adjacent to the root’s surface – and are dispersed through infected plant material in the soil. They are generally nonspecific as to the host required and therefore will infect any suitable plant species.

In addition to increasing the uptake of nutrients, mycorrhizae often provide some protection against soil-borne diseases. They may also increase a plant’s tolerance to adverse conditions. Drought, high temperatures, salinity, and acidity, or a build-up of toxic elements in the soil are some of the effects on host plants that mycorrhizae reduce. This aspect may be important to a tree’s survival in landscape plantings.

With all of the benefits afforded woody ornamentals by mycorrhizal relationships, one should consider the interaction of soil management practices with these beneficial fungi. Mycorrhizal deficiency may occur in soils that have been fumigated, areas where large amounts of topsoil have been removed, or in areas where trees have not been previously grown. The latter is particularly the case with evergreens and ectomycorrhiza which are more host-specific. Additions of nitrogen, phosphorus, or complete fertilizers will reduce the presence and activity of mycorrhiza. This effect is variable with the strain of fungus involved.

Mycorrhiza can play an important role in plant health. Although they are unseen, their effects can be remarkable, particularly in the case of their absence. The next time you are baffled by the results of a soil test which indicates adequate fertility in an area that clearly shows symptoms of deficiency, question whether the symbiotic relationship between these beneficial fungi and your plants might be out of balance.

The Care and Feeding of Soil Microbes